News > BEYOND MEAT EXPRESSED ITS PREFERENCE FOR SEYDELMANN RIGHT AWAY DURING THE PLANNING PHASE FOR THE NEW FACTORY!

BEYOND MEAT EXPRESSED ITS PREFERENCE FOR SEYDELMANN RIGHT AWAY DURING THE PLANNING PHASE FOR THE NEW FACTORY!

For a number of years, The New Plant in Zoeterwoude-Rijndijk (NL), has been producing various plant-based meat alternatives from the American brand ‘Beyond Meat’ in a brand new factory. Production is largely fully automated in order to minimize the chance of errors and to organize the factory process as efficiently as possible. To this end, The New Plant relied on Selo, which has automated both the ingredient supply and the mixing & cutting of the products. “The process, which usually still largely performed manually, is now fully automated, without the risk that the product will acquire different properties, says Operations Manager Ralph Soetens of The New Plant. The New Plant is probably less known to the general public, but that certainly does not apply to neighbor and parent company Zandbergen World’s Finest Meat. In the adjacent building, meat has been imported, traded and processed for the entire European market for almost fifty years. Plant-based meat product have also been part of the range since 2018. The New Plant is a co-production facility of Beyond Meat and Zandbergen, which produces the American brand’s plant-based meat product for the European market. “The first contact was made five years ago, which later resulted in a collaboration. Already during the planning phase for the new factory here in Zoeterwoude, a preference was immediately expressed for Seydelmann, because that brand was already used in the running processes in the United States. Subsequently, contact was made with Selo.” 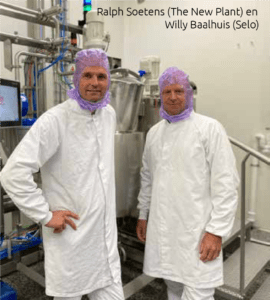 Willy Baalhuis, Sales manager at Selo, who has been the exclusive representative of Seydelmann in the Netherlands for more than seventy years, indicates that the New Plant came up with a number of specific questions and wishes. They wanted to partly automate the process, so that an efficiency improvement could be made in terms of the number of staff, which would create more peace of mind on the work floor and, of course, it would significantly reduce the chances of error. Seydelmann’s mixers and cutters are located in the production area, but the entire supply of ingredients is automated by Selo, says Baalhuis. “All liquid ingredients are dosed and mixed before going on for further processing in the factory.”

The advantage of a new factory is that the production process can be set up entirely according to your own insight, Says Soetens. “The disadvantage, however, is that there was not yet a running process on which we could implement improvements. So we literally started from scratch and gradually improved the production process. The line operates satisfactorily, but the demand for Beyond Meat’s Products continues to grow so fast that we are already in talks with Selo to fully automate a second line as well and further optimize the entire line concept with belts, buffers and vacuum transport, so that we can eliminate standard trolleys and that the entire logistics can be automated and controlled instead of manual transport.” 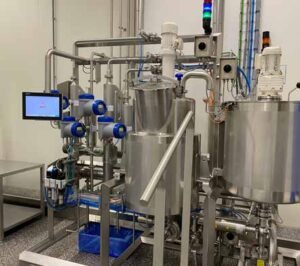 Selo operates in the meat processing and protein processing industry. According to Baalhuis, vegetable meat products require a different set-up and approach than meat products. “A lot of machines are basically the same, but for vegetable products you usually need more powerful motors and different configuration of the machine construction, because the dough is more sticky. So the machine needs a little more attention. Fortunately, Selo and Seydelmann are very innovative companies that invest a lot in development. The 1000 liter cutter is a great example of this, as it is the only vacuum cooking cutter in the world with that capacity. Over the past twenty years, we at Selo have built up a lot of know-how of oily food products. We are able to apply that know-how at The New Plant”, explains Baalhuis. “in the case of The New Plant, it is a new factory where only plant-based meat products are made. For manufacturers that produce both meat and vegetable, we always advise to separate the production, because from an allergy point of view it is very difficult to use one machine for both types of products”. “By the way, the machines have been developed in such a way that they can be very easily interconnected to machines from other brands”, continues Baalhuis. “Once the dough is prepared, it is passed on to a portioning machine from Vemag Maschinenbau and an extrusion machine (former) from DJM Food Processing. “As Selo, we are able to set up an entire factory or production area fully automated or semi-automatically. Seydelmann lays the foundation for mixing and cutting, but we also choose reliable partners for the other parts of a production line. Partners with a proven track record, That is certainly the case at The New Plant.”

Selo sticks out his neck for the customer

Selo sticks out his neck to help customers, according to Baalhuis. “Within Selo we have our own Technology Center, where we have all kinds of different machines and where we can test recipes with small quantities together with food technologists and ultimately scale up to the desired capacity. We are currently conducting protein test with vegetable products according to a new concept. In any case, it is nice for manufacturers that we can test products or a line in practice in our own Technology Center. We work out concepts together with the customer, maximizing efficiency and minimizing the chance of errors by staff. Because the entire process is automated, manual intervention is no longer necessary. Products are therefore consistent in composition, but it also increases food safety and hygienic working. The operator is shown step-by-step on the screen what he or she has to do. The software is written by Selo itself and from our location we can always watch live with the customer, in case something goes wrong or if the machines gives an error message or malfunction (Remote Control).” “Together with Selo, we will look at how we can further increase capacity, because the demand for our products is fast growing. We make portions of minced meat, sausages, burgers and meatballs here. The machines from Selo and Seydelmann are used for all these products,” Says Soetens. The collaboration between Selo, its partners and The New Plant has ensured that Beyond Meat has a modern factory in Zoeterwijde-Rijndijk where a large part is automated compared to the existing process in America. 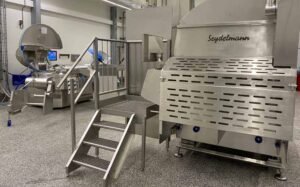